Evers' veto is secure, but some uncertainty remains for Stewardship funding

The dust is settling on the November 2022 elections and we’d like to offer our take on what the outcome means for Wisconsin’s flagship environmental conservation program, the Knowles-Nelson Stewardship Program.

Moving forward, the balance of power in Wisconsin will be roughly the same as it has been since the start of Governor Evers’ first term in 2019. In other words, Wisconsin’s government is divided. Tony Evers, a Democrat, will serve four more years as Governor. Republicans, on the other hand, maintain strong majorities in both chambers of the Legislature.

Of note, Republicans did not win a veto-proof majority in the Legislature, so Governor Evers will maintain his authority to veto legislation and to issue partial vetoes on appropriations bills like the state budget.

At the start of the new legislative session, there will be many new faces at the Capitol. Seven new state Senators and twenty-four new Assembly members are joining the Legislature.

There will also be significant changes to the membership of the powerful Joint Finance Committee, which exercises so much influence over many Knowles-Nelson projects and state budget deliberations. We won’t know the makeup of the finance committee until early 2023, but five of the current members are leaving the legislature.

Turnover in the Capitol means that we have our work cut out for us to educate a new class of legislators on the value of Knowles-Nelson and the importance of conservation to Wisconsin voters.

What does the future hold for funding the Stewardship Program? For more than a decade, Knowles-Nelson funding has been a controversial topic in the legislature, and funding for the program has been cut many times from a high of $86 million per year in 2010 down to its current funding of just over $33 million per year.

Funding for Knowles-Nelson is authorized through June 2026 and much of that funding should be secure. If the legislature tries to make significant cuts to the program in its next budget, Governor Evers could use his partial veto authority to reject those cuts and maintain much of the existing funding for the program. However, there’s a catch: approximately $8 million within the program-the portion which funds the DNR land acquisitions and County Forest acquisitions-is funded differently and it is likely that the Governor would not be able to use his partial veto authority to protect these pieces. Therefore, we will have to fight hard to protect Knowles-Nelson funding against further cuts even though the program is authorized for four more years.

Many of you followed the months-long saga of Cedar Gorge Clay Bluffs in Ozaukee County. It was your phone calls, emails, and letters to decision makers that brought attention to the broken review process and eventually convinced Governor Evers to fund the project with federal dollars. We’re still celebrating a happy ending, but there is a lot of work to do to reform the legislative review process.

What’s the problem? Any Knowles-Nelson award for more than $250,000, or that is for a project in northern Wisconsin, is subject to review by the legislature’s Joint Finance Committee (JFC), even after the DNR has approved the award.

The JFC has 14 days to review the grant. Any member of the committee can make an anonymous objection to the project, which kills the grant unless the committee votes to approve it. By law, the committee must schedule a meeting to discuss the grant. In practice, that often does not happen. The result is that grant applications languish for months or years with no public debate on the merits of the grant and no vote to approve or deny the grant. That’s just bad governance.

We will be fighting for two things:

First, we want legislators to follow the law. If a Knowles-Nelson grant is objected to, schedule a hearing on it so everyone knows why the objection was made and legislators can debate the grant. We want to see every grant application receive an up or down vote.

Second, we want the law revised to ensure transparency and accountability in the review process. There is a difference between responsible financial oversight and abusing legislative authority to slow or halt worthy land and water conservation projects.

Stay tuned for updates on how you can help us reform Knowles-Nelson so that we can get the Stewardship Program back on track.

As always, thank you so much for your support and advocacy. We are so impressed with the power and effectiveness of our coalition. Every voice matters and, together, we make sure that land trusts, local governments, and the state have the resources they need to protect the places that make Wisconsin special.

— Charlie Carlin and all your advocates at Gathering Waters

Evers’ veto is secure, but some uncertainty remains for Stewardship funding 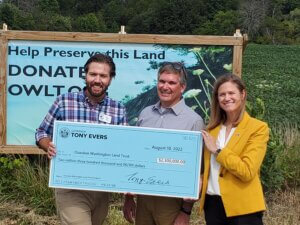 The purchase of the property was finalized days after Gov. Evers awarded $2.3 million through the American Rescue Plan Act to fund the project. 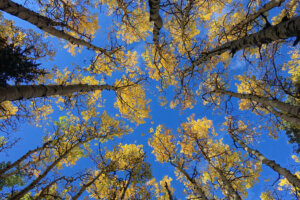 Forest County will soon have 160 more acres of public land

Governor Evers allocated funds through the American Rescue Plan after a grant through the Knowles-Nelson Stewardship Program was stalled by an anonymous objection. 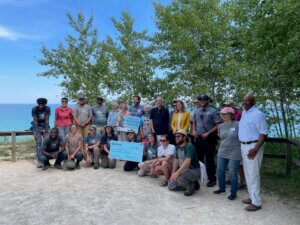 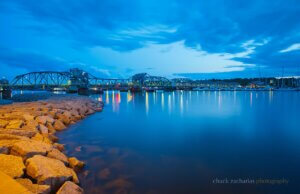 Residents celebrate the grand opening of a new promenade in the iconic Sturgeon Bay. 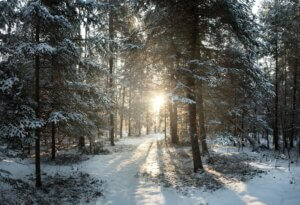